Jasvinder Nakhwal is a partner specialising in all aspects of business crime, in particular criminal cartel investigations, mutual legal assistance and extradition. Chambers UK 2013 quoted that "Jasvinder Nakhwal continues to impress clients with her extensive experience in cartel defence work"... and has a "thriving extradition practice". Jasvinder trained with Peters & Peters and qualified in 2002 as an Associate. She became a Partner in 2010, in the Business Crime team. Jasvinder has in-depth experience in advising both corporate and individual clients in fraud-related matters, with a firmly-established expertise in respect of criminal cartels, extradition, mutual legal assistance and corruption matters. Many of her cases have a strong international element. Jasvinder has acted for clients who simultaneously face investigation by the European Commission, the US Department of Justice, the Canadian Competition Commission and the Australian Competition and Consumer Commission. She also advises in respect of cash seizure and forfeiture cases brought under the Proceeds of Crime Act 2002, and has acted in cases involving allegations of corruption, money laundering, tax and duty evasion in professional disciplinary matters and in inquests and independent inquiries. Jasvinder is a regular speaker on her areas of expertise.

This month the US Sentencing Commission invited public comment on American antitrust offences and sentencing guidelines. The review forms part of a general consultation process aimed at reviewing sentencing issues.

The consultation, due to end on 1 May 2015, has highlighted the study of antitrust offences as one of its priority areas. It will include an examination of the corporate fine provisions contained in §2R1.1 of the antitrust sentencing guidelines, which covers bid-rigging, price-fixing and market allocation agreements among competitors.

The maximum sentence for cartel offences is currently 10 years. The length of prison sentences for antitrust offences in the US have increased significantly in recent years. In 1990 – 1999 the average prison sentence stood at 8 months, but by the period 2010 – 2013 this had increased to an average of 25 months.

The Commission will consider whether amendments to the guidelines are appropriate in light of the review and the responses it receives from the public.

On 21 March 2014 the Brazilian Conselho Administrativo de Defesa Econômica, (“CADE”), announced that its investigation into trains and subways in 5 Brazilian states had turned up evidence of cartel activity. The investigation is one of the largest ever conducted in Brazil and includes several multinational companies.

The investigation is focused on train and subway procurements between 1998 and 2013. 18 companies and 109 employees are accused of participation. A search and seizure operation in July 2013, carried out by CADE, produced evidence of possible bid-rigging in 15 public tenders worth a total of BRL 9.4 billion. The investigation arose from participation in a leniency programme by the German conglomerate Siemens.

In a 200-page report, CADE’s investigators claim the subway contractors divided the tenders among themselves by agreeing bids in advance. CADE has alleged that contractors accepted payments from rivals for not participating in the tenders.

The politically sensitive investigation has attracted more media attention than any previous cartel investigation in Brazil, due to suggestions that public officials were aware of the alleged conspiracy. Siemens’ voluntary disclosure surfaced just weeks before a contract for a 318-mile high-speed line between the cities of Sao Paulo and Rio de Janeiro came up for bidding. Under Brazilian law the companies involved could be fined 20% of their turnover. Balfour Beatty, Caterpillar, Alstom and Mitsui are included within the scope of the investigation, which has reportedly proceeded slowly due to the quantity of information seized in the July 2013 raids.

Public prosecutors in São Paulo have launched a parallel investigation into whether illegal kickbacks were paid to government officials to obtain lucrative contracts for the construction, fitting and maintenance of metro trains and lines. Observers have suggested that the case could lead to the first prison sentences for cartel activity in Brazilian history.

Foreign Ministry of Belarus has indicated that the extradition of Uralkali CEO Vladislav Baumgertner from Belarus to Russia is soon to be completed.

Uladzimir Makei, Belarusian Foreign Minister, is reported to have confirmed during a press conference in Moscow that he was “confident the problem will soon be solved completely in a lawful manner.”  He added that he was unable to give the precise date of the extradition, but that to his knowledge only a “few minor things are left to be done.”  Makei noted he had agreed with his Russian counterpart, Sergey Lavrov, that “private issues” would not have a negative impact on the co-operation between the two countries.  Mr Makei’s announcement comes after the Belarusian Prosecutor General, Alexander Konyuk, confirmed on 14th November 2013 that there were no obstacles to the extradition, although he emphasised that Uralkali’s CEO faced similar charges in Moscow to the ones he faced in Minsk.

As mentioned in a previous blog on 17th October 2013, Baumgertner is currently under house arrest in Minsk on charges of embezzlement and abuse of power.  His arrest in August 2013 came in the wake of Uralkali’s decision to withdraw from a cartel with Belarusian potash producer, Belaruskali, leading to a collapse in prices.  Together the two companies controlled approximately forty per cent of global potash exports.  Belarusian President Alexander Lukashenko made clear his strong opposition to the termination of co-operation between the two companies. Potash, a soil nutrient, provides twelve per cent of the state revenue of Belarus and ten per cent of its export income. 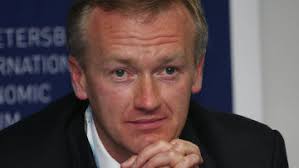 Takata Corporation, the Tokyo-based supplier of seat belts to Toyota, Honda, Nissan, Mazda and Fuji (the parent company of Subaru) will pay a US$71.3 million fine to settle conspiracy to restrain trade charges brought by the US Department of Justice Antitrust Division.

Takata is accused of conspiring with other companies between January 2003 and February 2011 to “suppress and eliminate competition in the automotive parts industry by agreeing to rig bids for, and to fix, stabilize and maintain the prices of certain seatbelts,” according to the criminal information sheet detailing charges against Takata, filed with the Detroit Court.

Reports indicate that Chairman and CEO Shigehisa Takada will take a 30 per cent cut in executive compensation while other directors take a 15 per cent cut. Gary Walker, a sales director at the company’s US subsidiary, TK Holdings, will reportedly serve a 14-month prison sentence and pay a US$20,000 fine.

Takata has pledged to continue to co-operate with ongoing Department of Justice investigations. The company stated that it “takes this matter seriously and has taken steps to strengthen its compliance programs to comply with all applicable laws and regulations. Takata has also strengthened its internal control systems to prevent a recurrence and is committed to regaining the trust of our stakeholders.”

The car industry investigation is the largest ever conducted in the United States. Settlement agreements with US antitrust authorities have been reached by several companies, including Tokai Rika, TRW Deutschland, Furukawa Electric, Fujikura and Nippon Seiki.

From the Department of Justice, Scott Hammond, of the Antitrust Division’s criminal enforcement program, said “Every time we discover a conspiracy involving the automotive industry, we seem to find another one.”

The investigation covered five cartels which operated between 2000 and 2009. They involved bid-rigging to coordinate both price and allocation of supplies of wire harnesses, which link together a car’s electrical components.

The largest fine of EUR125 million (over 85% of the total) was handed to Yasaki, the world’s largest maker of wire harnessing systems. The other companies fined were Furukawa, S-Y Systems Technologies and Leoni. The fines were set on the basis of the Commissions’ 2006 Guidelines on fines, taking into account the companies’ EEA sales of the products involved, the very serious nature of the infringement, the cartels geographic scope and their duration.

However, Sumitomo Electric, which was involved in all five cartels, will not have to pay any of its EUR291 million fine because it alerted regulators to the anti-competitive behaviour and as a result benefited from full immunity under the Commission’s 2006 Leniency Notice. The remaining companies received between 20 and 50% reductions under the leniency programme due to their full cooperation with the investigation. They received a further 10% reduction under the settlement procedure for cartels (see the Commission’s 2008 Settlement Notice) which requires companies to acknowledge both their infringement and liability in exchange for an additional discount.

The investigation started with inspections in 2010 and proceedings were opened in August 2012. It has taken just 8 months since settlement discussions started with the companies for the investigation to reach its conclusion. The immunity granted to Sumitomo Electric, which would otherwise have faced a fine twice as large as the total imposed on the other four companies, as well as the substantial reductions that the other participants in the cartels received, serves as a good example of the benefits of cooperation, and in particular of being the first to alert authorities in order to take advantage of antitrust leniency programmes.

This blog sets out the latest developments in cases and law on criminal cartels in the UK and the EU as well as major cases and developments from other countries where cartel conduct is criminalised, such as the US, Brazil and Australia.